How can we help you today?

Dropbox Advanced Sync has been removed in Foliobook 3.7.8

In June 2017 Dropbox removed their application programming interface version 1.0. (API),  as a result we had to rip out all our Dropbox code and rewrite it from scratch.  In the process we decided not to replace the advanced sync features described in this document.

Dropbox can still be used to populate galleries, add backgrounds etc. and our support for their version 2.0 API may expand in future as we develop the app further.

We are aware that the ability to initially populate a gallery with a Dropbox folder (see 1. below "Create a new gallery from a Dropbox folder in a single step") was popular with users and intend to reintroduce this in a later update in a slightly simpler form.

Please be aware that we are fully committed to Dropbox support and are working on a completely new version of Foliobook supporting Drag and Drop from Dropbox which makes using it even easier than in the past.

Here is a preview of Foliobook 4’s forthcoming features that make accessing Dropbox and other content more intuitive.

Synching with Dropbox in Foliobook 3.3

Versions of Foliobook prior to 3.3 could download images from Dropbox into Foliobook.

Version 3.3 goes beyond this to offer a one-way partially automatic synchronisation from Dropbox to Foliobook. With this new feature dropbox users can perform the following tasks.

By using these features, photographers who have a professional workflow from a tool such as Adobe Lightroom or Apple's Aperture can use Dropbox as a way of updating an entire portfolio very efficiently.

Each of these main tasks will be described in more detail below.

Note : When syncing a gallery for the first time Foliobook must perform a lengthy initial sync with Dropbox. A spinner appears with 'preparing' written on it. Depending on the size of your Dropbox storage this can take several minutes to complete the first time. We advise performing the first sync when connected to WiFi as a poor connection will risk that the initial sync needs to be repeated.

Note : Known bug in 3.3.  If you try to re-sync all galleries from the Backup menu when you have not yet linked galleries to Dropbox folders, the app will exit.

1. Create a new gallery from a Dropbox folder in a single step

This procedure uses what we call the gallery editor. To find this go to the main Foliobook home page and double tap to show the toolbar.

Then select the F -> Portfolio menu to show the current list of galleries.  Select 'Add New…' and then 'Gallery' to create a new gallery.

In Foliobook 3.3 there is a new button for Dropbox linking above the delete button on the left. 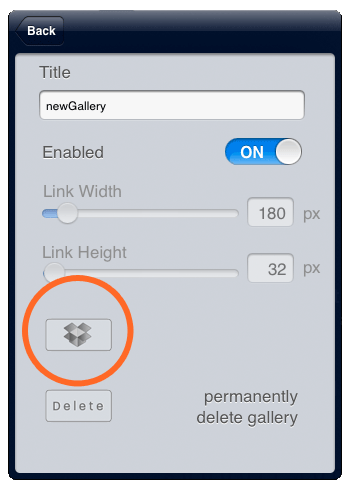 Tap this to open the Dropbox loading dialog. This is very similar dialog to the one used in the past to load from Dropbox.  If you are not yet signed into Dropbox you will be taken to the appropriate place to sign in, then you can re-open this menu.

To link the new gallery to Dropbox, navigate to the folder containing the images that you want to link/sync to this new gallery. 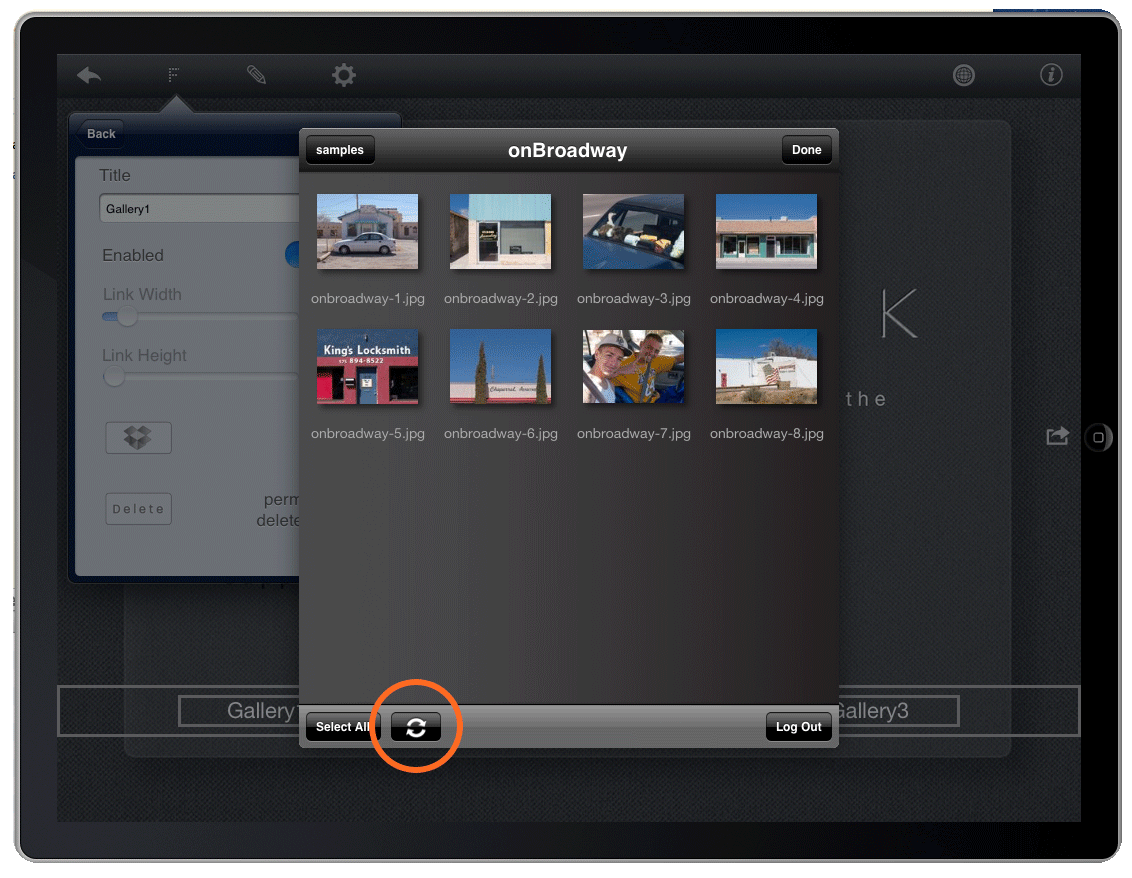 Once you have found the right set of images, press the 'sync' button at the bottom of the window. This will then cause the entire folder to be downloaded. At the completion of the download the folder is linked to Dropbox.

Note that if the folder contains any further folders, the contents of these nested folders will not be downloaded. Foliobook links a single gallery with a single folder and does not synchronize the folder structure from Dropbox itself.

When the download is completed the gallery is linked to the Dropbox folder and will stay linked until you decide to unlink it.

You will be asked if you want to rename the gallery with the name of the folder in Dropbox. If you make sure your Dropbox folder names are well thought through, this can save you extra work. 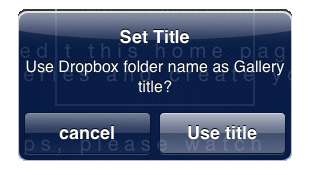 Link and unlink an existing gallery to a Dropbox folder.

There are two places you can link and unlink an existing synched gallery.

a) In the gallery editor

The first place is in the gallery editor. In section 1 we showed how the gallery can be linked at the time the gallery is created, however the same button can be used in the gallery editor at any future point. To link and unlink a single gallery from Dropbox, simply use the F -> Portfolio -> Gallery navigation and use the Dropbox button to control the galleries sync properties.  When a gallery is synched the button will show the sync icon.

Note that if a gallery contains images and is currently unlinked to Dropbox, then linking it to Dropbox will delete all the images currently in that gallery.

b) In the gallery lightbox

To use this feature, navigate into a gallery by pressing its link on the home page, or category page.

Then double tap to get the tool bar and select the lightbox button.

Once in the lightbox select the + button, then the Dropbox import option. This will open the Dropbox loading dialog. As with section 1, there is a sync button at the bottom. If you navigate to a folder within Dropbox, selecting that sync button will download all the images in the Dropbox folder and then link the gallery to Dropbox.

Note again that if the gallery contained images prior to linking Dropbox, those images will be deleted. 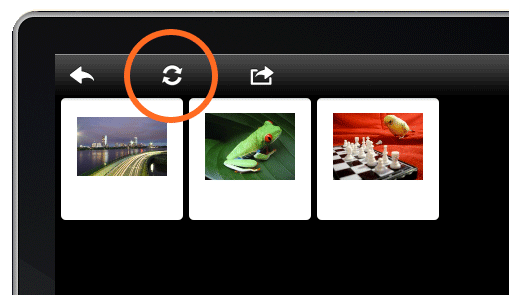 Pressing this reveals the following set of options 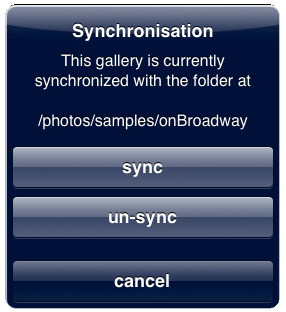 The cancel button just cancels this menu. The unlink button stops the gallery being used to synch with Dropbox leaving all the images currently in the gallery in place.

The 'sync button' allows us to re-synch the gallery, which is the subject of the next section.

The 'sync' option performs a resynchronisation of a single gallery. The following happens on a resync.

Note that if you have a number of galleries linked to Dropbox folders, it may be laborious to go into each gallery in turn and then re-synch each of them individually. To make life easier you can re-sync all linked galleries in a single go, this is described next. However you may find that synching a single gallery can be more effective if you are on a poor or slow network connection.

4  Re-synchronize all galleries in a single step when more than one gallery is changed on Dropbox.

In a real workflow a user may end up with multiple galleries linked to Dropbox folders. It will usually be more convenient to re-synch all of them with Dropbox in a single operation.

To do this, double tap on the home or category page and select F->Backup and sync->Dropbox Sync 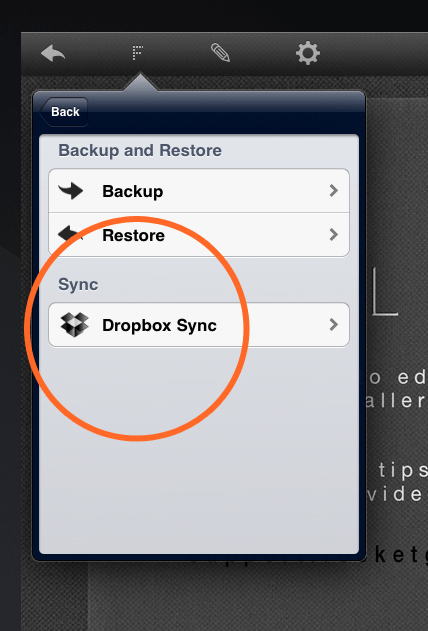 This shows the sync progress dialog. We recommend that you make a backup of your portfolio after every major change. A Dropbox sync can change many galleries very rapidly, so it's probably a good practice to backup before performing this operation. 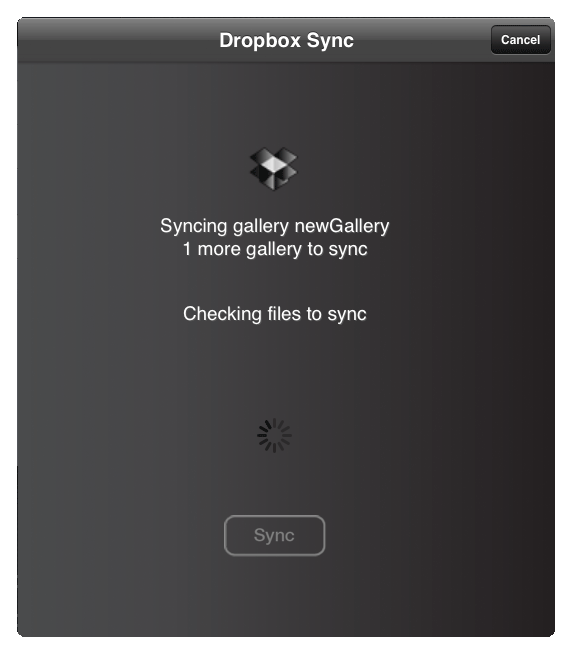 Selecting the 'Sync' button will result in the following steps

Sometimes, in the case of poor network speeds, the sync process will fail. In this case Foliobook deletes any newly downloaded synched files on a per gallery basis.

If you are synching a single gallery, then the result will be an empty gallery. You can attempt to sync again at any point.

If you are syncing multiple galleries, then Foliobook will only fail on the last gallery being synced. All galleries correctly synched before the last one fails will remain with the newly synched contents. You may repeat a multiple sync at any time to complete syncing all the galleries

Using with a Lightroom or Aperture workflow

Photographers who use these tools or other asset management systems can benefit from a careful structuring of collections in their respective tool.

In Adobe Lightroom a set of collections and collection-sets can be constructed to have the entire desired structure of a Foliobook portfolio. These can then be exported to Dropbox using an appropriate Dropbox plug-in for Lightroom. It is then possible to export all the collections to Dropbox easily.  Once this has been completed, the Foliobook can synchronize using the methods described throughout this paper. Note that each gallery must be individually linked with the appropriate Lightroom output folder, but once this has been done the user can use the multiple gallery synch to update their entire portfolio in a single step

Note that synchronization is one-way and follows a master->copy model. Whatever changes are made in Dropbox are reflected in Foliobook. Changes made to contents of galleries in Foliobook such as changing the order of galleries, editing metadata etc. are not pushed back into Dropbox.

Did you find it helpful? Yes No

Send feedback
Sorry we couldn't be helpful. Help us improve this article with your feedback.